In light of all of the recent Math activity in the classroom, I thought it would be prudent to share some thoughts about Montessori's ideas regarding mathematics.  One such concept is the 'Mathematical Mind' of the child and  how the prepared environment naturally stimulates mathematical thinking.

Maria Montessori’s use of the term, ‘The Mathematical Mind’ refers to the unique tendencies of the human mind. She was familiar with Blaise Pascal, a French philosopher, physicist, and mathematician, who theorized that “man’s mind was mathematical by nature and that knowledge and progress came from accurate observation” (The Absorbent Mind, 17, pg. 169).  Montessori designed the specialized Math apparatus to incorporate the spontaneity and natural capabilities of a child’s mathematical mind.  The Early Childhood classroom offers children order, precision, and exactness through the manipulation of materials.  Consequently, their understanding of the surrounding environment is built on a foundation which is mathematical by nature.  “In our work, therefore, we have given a name to this part of the mind which is built up by exactitude, we call it the ‘mathematical mind’ (The Absorbent Mind, 17, 169).  Montessori emphasized the importance of this concept in relation to the child’s developing views toward the study of mathematics.  She proposed that the introduction of mathematics during the period of the absorbent mind (0-6 years) enables the child to form positive associations with numbers which can be carried on throughout life.  Montessori expands, “The results we obtain with our little ones contrast oddly with the fact that mathematics is so often held to be a scourge rather than a pleasure in school programs.  Most people have developed ‘mental barriers’ against it.  Yet all is easy if only its roots can be planted in the absorbent mind” (The Absorbent Mind, 17, pg. 170). 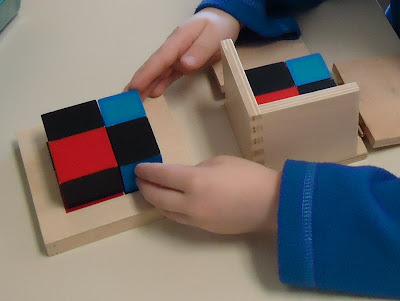 The concepts within the mathematical mind do not simply refer to common associations with math such as basic operations.  Instead, Montessori believed that the human tendencies lead one to be mathematical in thought.  That is, basic human tendencies such as order, orientation, exactness, repetition, activity, and manipulation of objects, all lead to the development of a mathematical process of thought.    “The child perceives, without conscious reasoning, patterns of relationships:  things to things, things to people, people to people…The mathematical mind [therefore] is a power to organize, classify and quantify within the context of our life experience” (Helfrich, The Mathematical Mind).  Additionally, Montessori believed that this manifests itself naturally within each person.  For this reason, the study of mathematics should follow a similar organic process and be considered a natural progression of educational growth.   Interestingly, it is no accident that the basic materials of the Sensorial apparatus are based on the quantity of ten.  Likewise, the area of Practical Life nurtures the mathematical mind of the child through its precision and order.  Furthermore, one can surmise that the entirety of the Prepared Environment is a foundation for the mathematical mind of the child.

At a certain point in development, namely the emergence of the sensitive period for numbers, an awakening occurs in the child’s mathematical nature.  “The child spontaneously begins to awaken consciously to the patterns of the world” (Helfrich, The Mathematical Mind).  He graduates form purely sensorial explorations to specific measuring and counting.  Typical questions are “how much?” or “how many?”  The child must attain a certain level of intellectual maturity that cannot be taught, but rather intrinsically absorbed.
Montessori discovered that a child who could successfully comprehend the numbers one through ten was also capable of working with 100’s and 1000’s at the same level.  Moreover, if a child can count from one to nine, he can just as easily count from ten to 90.  In order to present the material in this manner, 90 simply had to be divided into nine equal parts.  Thus, Montessori developed the ten-bead bar.  Similarly, 100 could be presented in the form of a hundred square, made of ten ten-bead bars.  The 1000 cube was formed by joining ten 100 squares together. 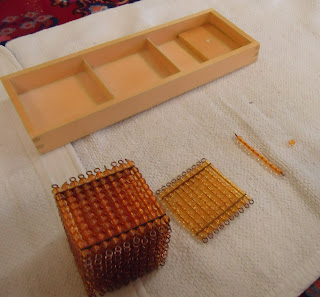 After developing this material based on the decimal system, children who could count to ten could just as easily count to 2,867 using, for example, two 1000 cubes, eight 100 squares, six tens, and seven ones.
Montessori demonstrated that if a child has access to concrete mathematical equipment in his early years, he can joyfully acquire many facts and skills of arithmetic.  On the other hand, these same skills and facts may require long hours of laborious work if introduced later in abstract forms.  Having observed children’s interest in counting and manipulating objects, Montessori designed concrete materials to represent all types of quantities. The Montessori setting not only enables a child to see the symbol for 1 or 1000, but also allows him to hold the corresponding quantities in his hand.  Later, by combining this equipment, separating it, counting it, and comparing it, he can demonstrate to himself the basic operations of arithmetic.  These activities allow a child to experience the satisfaction of learning through self-discovery. 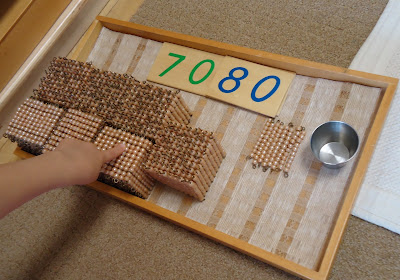 Montessori’s understanding of the child’s natural inclinations toward mathematics is a guiding principle throughout all areas of the curriculum.  The Montessori materials and curriculum areas further enhance the child’s natural exploration and development within the mathematical mind. During the sensitive period for numbers, the specialized didactic materials allow the child to form concrete impressions of the world of mathematics.  This in turn, allows him to experience mathematics with positive associations while constructing self-knowledge in the subject matter.  The learning, therefore, is truly the child’s own and cultivates the spirit of a life-long love of learning.
﻿
Posted by Sasha at 2:24 PM