Have you ever watched a toddler "scribble"?  Did you ever notice the curves of a child's first attempts at writing?  You may have seen what comes naturally to the child - curvilinear shapes completed with smooth and graceful movements of the hand.  If one juxtaposes this against the traditional methods of teaching writing, we find a stark contrast.  The straight lines and rigid movements which are characteristic of manuscript (print) writing simply do not come naturally to the child.

I have spent a great deal of time analyzing the rationale for cursive writing in the Primary Montessori classroom.  During my training, I was given an article written by Carole Alver in the AMI/USA News, May 1999, which ultimately persuaded me to introduce cursive in my classroom.  I began analyzing the movements within the lessons which provide indirect preparations for writing.  These include lessons of washing the easel, tables, and all of the polishing work.  It was a revelation of sorts, to realize that the movements required for these lessons all use curving movements and circular motions which are inherent to cursive lettering.

The article goes on to explain the breakdown in writing the word 'hat' in manuscript.  "The child would begin with the down stroke [for the letter 'h'].  Next, she would have to spatially decide where on the down stroke the pencil needs to go to make the next curvilinear stroke - a feat not easy for the 4 1/2 year old whose visual acuity is also in the developing stages....Further, the child is now confronted with the letter 'a' and its placement.  How far must the hand move to right of 'h' to allow room for the 'a' to come toward it?  Where on the down stroke of the 't' does the pencil go to make the horizontal stroke?  ...However, in writing  the word 'hat' in script, the child does not have to lift the pencil until the word is completed except for crossing the 't'.  The movement is one continuous flow and direction."  In turn, this eliminates several processing elements which might hinder and/or diminish the child's enthusiasm for writing.

There are additional reasons why I believe cursive writing can be successfully introduced at the primary level.  One major component to this rationale is letter reversal.  The formation of cursive lettering is sensorially different than manuscript writing, giving the child more opportunities to discriminate between letters, i.e. letters 'b' and 'p' or 'd' and 'b.'  Furthermore, one must understand and appreciate the muscular involvement of the formation of cursive letters.  The Montessori environment underscores the natural inclinations of children's movement with opportunities for them to use and refine the large and small circular movements of the arms, hand, and fingers (as seen in the previously mentioned Practical Life exercises).  In keeping with this principle I think of how Montessori herself observed that the "muscular memory of the young child is most tenacious, and at the same time, most ready,"( Alver, AMI/USA).

One can call me "old-world," but I honestly enjoy the visual aspect of cursive writing as well.  In this day and age of computers and gadgetry, I sincerely appreciate the hand-written form in its "old-school" format.  In fact, script was the only form in which the teaching of writing was instructed until the 1940's.  At that time, it was suddenly thought that children's reading skills would be better suited if they learned the ball and stick method of writing.  Current research, however, indicates that children who initially learn cursive can easily adapt to reading manuscript.  Conversely, children who are not provided early opportunities with cursive, find it difficult to learn (and read) later in life.

I understand that most of the children in my class will go on to traditional schooling which only introduces cursive at the third grade.  In fact, when they enter Kindergarten or first grade, they will be expected to write with manuscript lettering.  If that is the case, I know that their musculature at that age will be more developed and better able to handle the requirements of printing.  And when they get to the third grade and "start" learning cursive, I will be confident that during their stage of development known as the Absorbent Mind, they have already acquired the foundation for success in cursive writing.

If one takes time to appreciate the natural inclinations of the young child and analyze their movement, musculature, and brain development, we come to the realization that there is no better time to teach cursive writing than during the primary years. 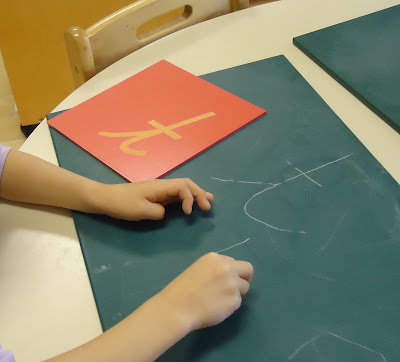