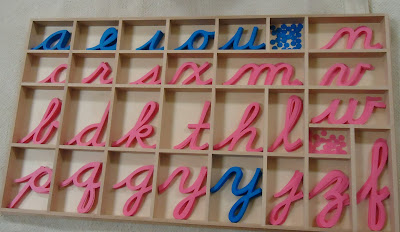 I have been waiting since September for this  Cursive Moveable Alphabet box from Nienhuis and it finally arrived! After several months of back order status, I was informed that only the bottom of the box could be sent because the lids have all been warping. That was fine with me because now I can at least store and display the letters in an organized, inviting manner. Once the new boxes arrive at Nienhuis (the non-warping ones), they will send me the box in its entirety, lid and all. That will be a great day. In the meantime, I have been ogling our letters in their new home! This was a huge splurge but I wanted only the best Moveable Alphabet after having been disappointed with others available through different Montessori material companies.

The beautiful mat with red lines was hand-made by my mom - Thanks, Mom - its workmanship rivals that of Nienhuis'!  I feel it is important to have designated mats to be used with different materials in the classroom. Not only does this provide a meaningful point of interest for the kids, but also, as evidenced here, one can see the critical aspect of having lines to on which to place the letters: 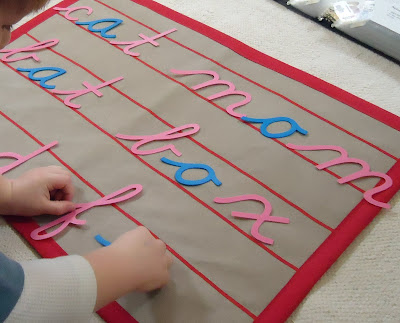 It has been rewarding presenting lessons to the children with the Moveable Alphabet.  This material is perfect for the child who knows letters sounds with symbols and can begin to put those sounds and symbols together to make words.  Additionally, the Moveable Alphabet allows the child to "write" his thoughts even though his hand might not be ready to produce the letters with pencil and paper.   Not only does this boost the confidence level within child, but it also instills a sense of accomplishment.  What a fantastic way to build positive associations with writing!
Posted by Sasha at 2:30 PM

Email ThisBlogThis!Share to TwitterShare to FacebookShare to Pinterest
Labels: Language